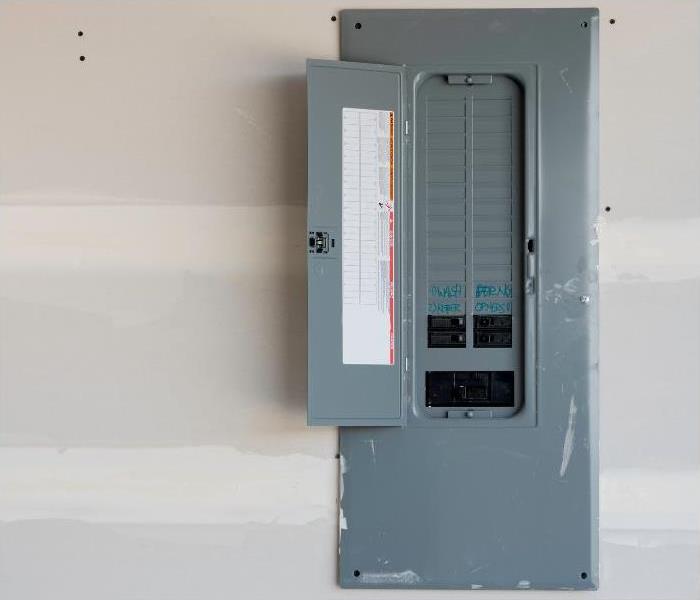 During an electrical fire, rush to your electrical panel to cut off the source.

Knowing the potential causes of electrical fires will help understand how they can be avoided.

An electrical fire can be devastating. You must know the warning signs of an electrical fire, as well as what to do if one happens in your home or business. Electrical fires occur when there is a problem with the electricity flow, which causes heat and sparks that set materials on fire. The National Fire Protection Association (NFPA) states that it's "estimated about 13% of all home fires are caused by faulty wiring and (39%) of all electrical failure or malfunction occurred in the cold weather months from November through February."

This blog post aims to help homeowners throughout greater Atlanta prevent electrical fire damage from occurring. When fire damage does occur, you can count on the first responders at SERVPRO for high-quality fire restoration services.

How do electrical fires start?

The opposite occurs for wiring in older homes. Electrical circuits in older homes are designed to handle the amount of electricity needed for today's appliances. Outdated circuit breakers will likely have worn faulty connectors that will cause an electrical system to overload and start a fire.

An electrical circuit overload will occur when there is more electricity inputted than a circuit can handle. A circuit breaker will trip and shut down all power to the specific circuit in most newer homes when a circuit receives too much electricity. An electrical fire occurs when the breaker is not triggered, causing the wires to overheat.

Old appliances like a record player from the '70s can start an electrical fire by not having a properly insulated cord. Electrical fires can also form when the old appliance's power supply malfunctions and feeds electricity in an uncontrolled fashion.

Light bulbs are used in nearly every room of a home. To avoid an electrical fire, you must use light bulbs that are designed for your light fixtures. Electrical fires caused by light fixtures will occur when a bulb with a wattage that is too high is installed. The wrong wattage will cause brittle wiring in a light bulb leading to a bulb catching fire.

Inside a light fixture, the heat from a light bulb will not dissipate as well, causing a greater risk of fire. When a bulb overheats, it will damage a fixture, melt the socket inside it, and likely start a fire.

Electrical fires caused by improper wiring can be difficult for homeowners to detect because there is no flame or smoke associated with this type of electrical fire. A homeowner should get an electrician out when their breaker is constantly tripping.

How to put out an electrical fire?

Final thoughts and who to call for electrical fire restoration

When an electrical fire occurs, you will want to call a reputable company with a known track record of putting customers first. The IICRC certified professionals at SERVPRO of North Fulton are available 24/7 for any questions or concerns regarding electric fire damage.